Here’s a look at the life of Keith Richards, musician and founding member of the Rolling Stones. 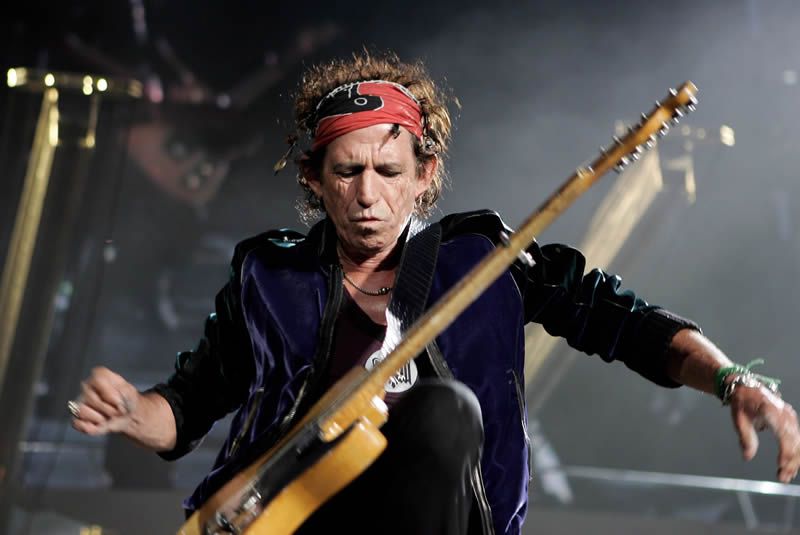 Children: with Patti Hansen: Theodora and Alexandra; with Anita Pallenberg: Marlon, Dandelion, and Tara (son, died as an infant)

Has been nominated, with the Rolling Stones, for 12 Grammy Awards and has won three.

1960 – Rekindles friendship with Jagger after running into him at a train station.

1962 – Forms the Rolling Stones with Jagger and Brian Jones.

July 12, 1962 – The Rolling Stones play their first gig together at the Marquee Club in London.

1963 – The Rolling Stones sign to Decca Records and release their first single.

1965 – The single “(I Can’t Get No) Satisfaction” is released and earns the band their first gold record.

1967 – Richards is arrested, with Jagger, for drug possession. Jagger is sentenced to three months in prison and Richards to one year. Later, the sentences are overturned on appeal.

July 5, 1969 – The Rolling Stones give a free concert in London’s Hyde Park. Jagger reads poetry and releases 3,500 butterflies in honor of former band mate Brian Jones, who was found dead on July 3.

December 6, 1969 – A fan is fatally stabbed during a free concert at Altamont Speedway in Livermore, California. The documentary, “Gimme Shelter,” is released in 1970 about the concert and the tragedy.

February 27, 1977 – Richards is arrested in Canada for heroin possession. Later, he is placed on probation and ordered to perform a benefit concert for a Toronto charity.

1989 – The Rolling Stones are inducted into the Rock and Roll Hall of Fame.

October 18, 2012 – “Crossfire Hurricane,” a documentary on the band, opens at the London Film Festival.

May 3, 2013 – The Rolling Stones kick off their “50 and Counting” tour at the Staples Center in Los Angeles.

September 9, 2014 – “Gus and Me,” an illustrated children’s book by Richards and his daughter Theodora, is published. The story is about Richards’ first guitar and his relationship with his late jazz musician grandfather.

March 25, 2016 – The Rolling Stones become the first major international rock band to play in Cuba, drawing hundreds of thousands of people to a free concert in Havana.

December 2, 2016 – The Rolling Stones release “Blue & Lonesome,” their first studio album in more than a decade.

November 13, 2020 – A live recording of the December 1988 show Richards played with his band The X-Pensive Winos, “Live at the Hollywood Palladium,” is reissued as a box set.

September 26, 2021 – Richards, Jagger and Ronnie Wood honor their bandmate of nearly six decades, Charlie Watts, as they kick off their pandemic-delayed “No Filter” tour at The Dome at America’s Center in St. Louis, Missouri. The show opens to an empty stage with just a drum beat, as pictures and videos of Watts are projected on four huge screens. The concert marks the band’s first concert without the late drummer, who died in August at age 80.