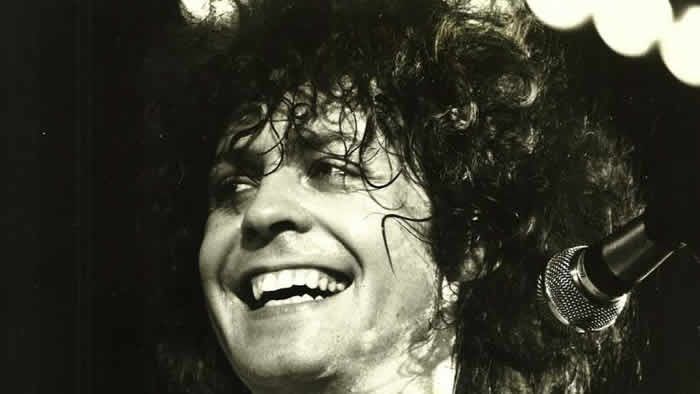 THE last time they were together, David Bowie cracked a broad grin when his exuberant pal and rival fell from the stage as TV cameras filmed Marc Bolan’s final public performance.

After a few challenging years lost to brandy and cocaine, as Bolan hosted the series Marc on Granada Television he had cleaned up his act and lost weight since becoming a father in 1975.

He filmed the last of six Marc episodes on September 7, 1977, with Bowie as a guest. Nine days later he died instantly in a car accident after a night out with his lover and band member Gloria Jones, who was driving them home.

Bolan the petite, eye-glittered, satin-wrapped, glam-rock pioneer lead singer of 1970 creation T. Rex, was born 70 years ago today, on September 30, 1947. He died on September 16, 1977 and was buried before his final TV show screened. Bolan, then Mark Feld, met Bowie, still Davie Jones, in mid 1964 when song publisher Les Conn, who was managing both struggling artists, employed them to whitewash his office. “So there’s me and this mod whitewashing Les’s office,” Bowie recalled. “And he goes, ‘Where d’you get those shoes, man? Where d’you get your shirt?’ We immediately started talking about clothes and sewing machines.”

Bolan’s father Simeon Feld was an East End Jewish truck driver. His mother Phyllis had a fruit stall in a Soho market. They already had an older son, Harry. Bolan says he always knew he was different, and found his creative calling when his father confused Bill Haley with another US artist, and came home with a recording of Rock Around The Clock.

Bolan discovered Elvis at age nine, and his mother bought him a cheap guitar. He was in his first rock’n’roll band at 12, with older school friend Helen Shapiro, possibly playing as Susie & The Hoola-Hoops, until she started high school. At 14 Feld appeared in a story about mods in Town magazine, when he boasted of owning 10 suits, “eight sports jackets, 15 pairs of slacks, 30 or 35 good shirts, about 20 jumpers, three leather jackets, two suede jackets, five or six pairs of shoes and 30 exceptionally good ties.” On trips to Soho with his mother, Bolan visited Old Compton St and The 2i’s coffee shop, considered the cradle of English rock’n’roll. At 16, perhaps encouraged by Shapiro’s early chart success, he pestered record producer Joe Meek to make him a star. His only record, Mrs Jones, flopped.

His luck changed when he took the name Marc Bolan and told music manager Simon Napier-Bell he was going to be “the biggest British rock star ever”. Napier-Bell, impressed by Bolan’s confidence and his “prettiness”, secured a deal with Parlophone to record Hippy Gumbo, also a flop, but later played by broadcaster John Peel.

On his Perfurmed Garden radio show in autumn 1967, Peel enthused about Bolan’s “amazing” voice after hearing him sing with John’s Children. This band also came to a quick end, partly as some radio stations banned Bolan’s song Desdemona, with its “obscene” lyrics, “lift up your skirt and fly”. Billing himself as a hippy poet, in 1967 Bolan founded Tyrannosaurus Rex with percussionist Steve Peregrine Took, who was dropped as his drug addiction accelerated. US music producer Tony Visconti, who had just arrived in London, was scouting for fresh talent when he saw Bolan and Took in 1968.

“On my first night, I went to see Tyrannosaurus Rex at the Middle Earth club in Tottenham Court Rd,” Visconti recalled. “What I saw in Marc Bolan had nothing to do with ... very high standards of artistry; I saw raw talent. I saw genius. They were a folk duo, but I saw a potential rock star in Marc.”

Despite his flower-power apparel, Visconti says Bolan “wasn’t really a hippy. When I was recording him he was still living with his parents. He never did hallucinogenic drugs but he certainly dressed the part, he certainly got it. He was sensitive and poetic.” T. Rex lead singer Marc Bolan (right) with his girlfriend and keyboardist in the band, Gloria Jones, and their son Rolan in October 1975. And despite his later attraction to Tolkien’s Hobbit and Lord Of The Rings, Bolan was dyslexic. He quoted from the books after his girlfriend, and later wife, June Child read them to him in bed. Possibly through Child, Bolan also befriended Alice Ormsby-Gore and her boyfriend Eric Clapton, who gave him electric guitar lessons.

Visconti says he shortened the band name to T. Rex, adopted by Bolan in 1970 when he teamed with Mickey Finn, Bill Legend and Steve Currie. Accused of selling out when their single Ride A White Swan reached number two, Bolan didn’t care. By 1973 T. Rex had enjoyed 11 singles in the UK top 10, and four UK number one hits.