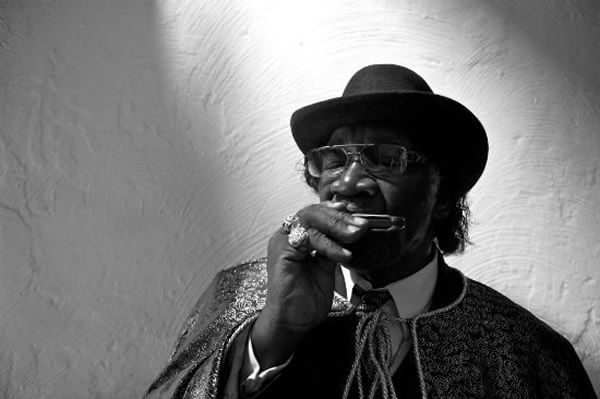 The legendary Big George Brock has passed away - VIA LOU BOPP

St. Louis blues musician Big George Brock, a longtime staple of St. Louis' blues scene, has passed away at the age of 88. The cause of death is unknown at this time.

Born in Mississippi, Brock moved to St. Louis in 1950 and became a massively influential part of the city's blues community, dubbed in some circles as the "King of the St. Louis Blues." His career saw him perform alongside the likes of fellow blues legends Howlin' Wolf, Muddy Waters, Albert King, Little Milton and Jimmy Reed.

In St. Louis, Brock ran the popular Club Caravan nightclub near North Garrison and Franklin Avenue for eighteen years in the '50s and '60s. More recently, he was a part of the effort that brought to life the National Blues Museum downtown, and in 2017 he was honored with a special concert at the museum. Known for his flashy attire, one of Brock's stage outfits is even on display there.

Brock continued to perform regularly at venues across town, even playing a party for his own 87th birthday at the Ambassador just last year.

He was also dubbed "Best Blues Artist" by this publication more times than we can count, often alongside his band, the Houserockers.

In 2012, former RFT writer Dean C. Minderman had this to say:

While he's spent more than half a century in St. Louis, Brock's sound remains connected to his Mississippi roots, with driving beats and raucous guitars that conjure up the joyous chaos of a packed juke joint on Saturday night. Also known for his charismatic stage personality and the sartorial splendor of his brightly-colored, suit-with-matching-hat outfits, Brock is a vital example of the continued potency of down-home blues.

In 2011 we published this tribute to the man's talents:

Whether the endpoint is St. Louis, Chicago, Memphis or somewhere else, the path of the blues inevitably seems to lead back to a starting point in Mississippi. Although he's made his home in St. Louis for most of his adult life, that's where Big George Brock is from, and the sounds of his home state still resonate in every note he sings and plays. One of a dwindling number of bluesmen of his generation still working, Brock occupies his own niche, with a sound both rougher and more idiosyncratic than such great Chicago bands as Muddy Waters, but more polished than the minimalist juke-joint combos still found in the deep South.

As a musician, Brock is also a man of substance, for his blues are as authentic as you'll find anywhere. He specializes in a raucous, electrified blend of guitars, harmonica and drums that evokes both Mississippi juke joints and big-city barrooms, all topped off by his commanding vocals and scalding harmonica licks.

We could go on, but the point is made: Big George Brock was one of the greatest blues artists this city has ever seen, and he will be missed tremendously.

Rest in peace to a true St. Louis legend.