From “SNL” to nearly starring in a Werner Herzog classic Happy birthday Mick Jagger! The Rolling Stones frontman turned 75 on Thursday, and he hasn't lost any of his trademark swagger. After decades of rocking out, he's found more than a few choice TV and movie moments throughout his career: everything from numerous cameos and hosting stints on "SNL" to working with directors like the Maysles Brothers and Werner Herzog. Check out some of his other greatest licks below: One of the first, unvarnished, humble looks at The Rolling Stones came in the 1970 documentary "Gimme Shelter." The Maysles Brothers documented the Stones' attempt to stage a massive free concert attended by 300,000 people, and things went poorly. The concert doc footage shows the band raw and rowdy in a way you wouldn't see them today, but the harrowing moment comes when Jagger, viewing in astonishment, footage of a man in the crowd pulling out a gun during the performance. To see his reaction feels like a symbolic end to the '60s. Jagger starred in Nicolas Roeg's hot-button cult film "Performance" in 1970, giving something of a dual role in what would be a bizarre mix of a gangster film and a psychosexual drama. 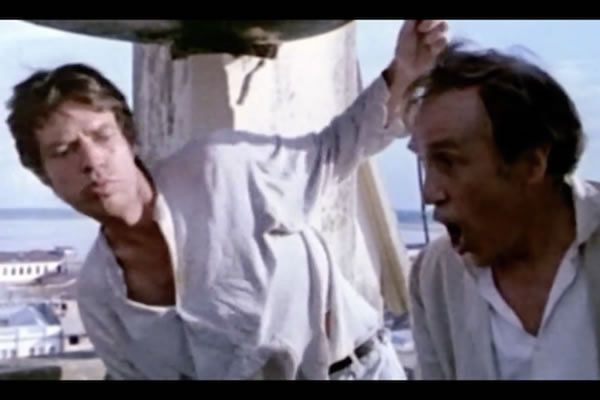 Mick Jagger almost starred alongside Jason Robards in Werner Herzog's historical epic "Fitzcarraldo," looking youthful and exuberant in the few scenes he actually filmed. But when Robards came down with an illness delaying the shoot, Jagger's shooting schedule ran out and he returned to tour with The Rolling Stones. Herzog ended up cutting Jagger's character from the movie altogether and recast Robards with Klaus Kinski, who was plenty crazy enough on screen for two people. In an inspired twist, Jagger appeared in this 1993 "Weekend Update" not as himself but dressed as his bandmate Keith Richards. Mike Myers essentially did Austin Powers doing Mick Jagger, but Mick's Keith impression is spot on, from indecipherable, slurred words, excessive chain smoking and his posture and legs going every which way. "You shriveled old fruit basket," Maya Rudolph's Donatella Versace says to Jagger in this ridiculous "SNL" sketch from 2001. Dressed as a garish designer, Jagger and Rudolph trade some barbs before Jagger drops a hair dryer into Versace's bathtub, just giving her a little tingle. In 2001, Jagger toned down his energy and earned some positive marks from critics for the somber character drama "The Man From Elysian Fields," playing an elegant Englishman named Luther who runs a premium escort service. In what would become a staple of Jimmy Fallon's "Tonight Show," Fallon sat opposite Mick Jagger pretending to be his reflection in this 2013 "SNL" hosting stint for Jagger. No one points his fingers better than Jagger.