Byron Berline (born July 6, 1944) is an American fiddle player. He is widely recognized as one of the world's premier fiddle players[citation needed], known for his ability to play almost any style within the vast American tradition—from old-time to ragtime, bluegrass, Cajun, country, rock, and beyond. 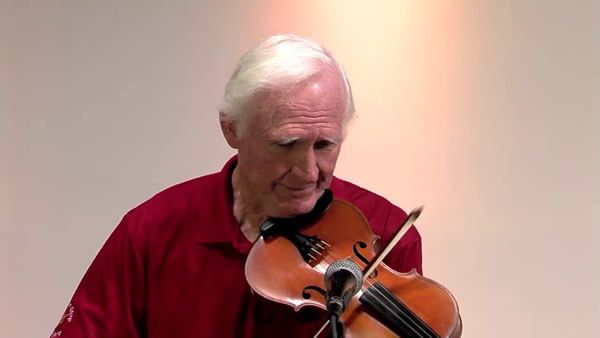 Berline was born in Caldwell, Kansas, started playing the fiddle at age five and quickly developed a talent for it. In 1965, he recorded the album Pickin' and Fiddlin' with the Dillards. The same year, he met Bill Monroe at the Newport Folk Festival and was offered a job with the Bluegrass Boys but he turned it down in order to finish his education. He graduated from the University of Oklahoma in 1967 with a teaching degree in Physical Education, and joined the Bluegrass Boys shortly after. Byron Berline first met Bill Monroe in 1965 and was offered a job then. It wasn't until 1967 that he actually joined the band, though, replacing Richard Greene in March and leaving to go into the Army in September. He recorded three instrumentals with the Blue Grass Boys, including "Gold Rush" which he co-wrote with Monroe, and which has become a jam session standard.

In September 1967, he was drafted by the U.S. Army. After his discharge, two years later, he joined Dillard & Clark on the album Through the Morning, Through the Night. In 1969, he moved to Southern California. Berline won the National Oldtime Fiddle Contest Championship in 1965 in Weiser, Idaho. He went on to win the title twice more, in 1967 & 1970. While in California, he joined The Flying Burrito Brothers in 1971, recording two albums, Last of the Red Hot Burritos (Live), and Six Days On the Road: Live in Amsterdam. After the Burritos' breakup, Berline briefly worked with Stephen Stills' band Manassas (which also included several other Burritos' alumni), contributing to several songs on their debut album. He formed the Country Gazette early in 1972, together with Alan Munde, Kenny Wertz, and Roger Bush.

Berline joined forces with guitarist Dan Crary, banjo player John Hickman a and others to form Byron Berline and Sundance. Their self-titled debut album was released on MCA Records in 1976. A young Vince Gill later joined the band on mandolin. The album Live at McCabes was released in 1978. In 1979, Berline had a small role as a country musician in the film, The Rose. In 1987, Berline appeared briefly playing a violin in the first-season episode "Where No One Has Gone Before" of Star Trek: The Next Generation. Berline collaborated with banjo player John Hickman and guitarist Dan Crary to form the band Berline, Crary, and Hickman; with the addition of Steve Spurgin and John Moore, later, that band became known as California. California was named the International Bluegrass Music Association Instrumental Group of the Year in 1992, 1993, and 1994.

In April 1995, Berline moved to Guthrie, Oklahoma to open a fiddle shop called "Double Stop". From the jam sessions on the upper floor, "The Byron Berline Band" was formed. Two years later he founded the annual Oklahoma International Bluegrass Festival." The annual event is among the most acclaimed bluegrass festivals in the United States. Throughout the festival's existence, Berline has brought an array of legendary bluegrass musicians to Guthrie, including Earl Scruggs, Ricky Skaggs, John Hartford, and many others. The OIBF has featured performances by famous international bluegrass artists including the Czech band Druhá Tráva, the Swiss band the Kruger Brothers, and The Japanese Bluegrass Band.

Berline recorded several solo albums, most notably Fiddle and a Song, which featured guest performances from Earl Scruggs, Bill Monroe, Vince Gill, and Mason Williams. In 1995, the album was nominated for a Grammy Award in the Best Bluegrass Album category, and "Sally Goodin" from the album was nominated in the category Best Country & Western Instrumental Performance. Berline currently owns and operates the Double Stop Fiddle Shop in Guthrie, where Hickman works as luthier. They, along with Jim Fish, Richard Sharp, Greg Burgess, and Steve Short, make up The Byron Berline Band. The band travels around the country and to Europe regularly, but continues to perform two concerts a month in Guthrie, entertaining residents of their home town. On February 23, 2019, The Double Stop Fiddle Shop burned to the ground while Mr. Berline was in Mexico. The fire destroyed dozens of irreplaceable instruments, however one of Byrone's favorite Mandolins was preserved in a safe, while the other instruments in the safe were destroyed. Mr. Berline has stated that he will rebuild.