Ahead of a new doc telling his life story, the guitar legend reflects on more than 50 years of work with everyone from Jimmy Page to Tina Turner 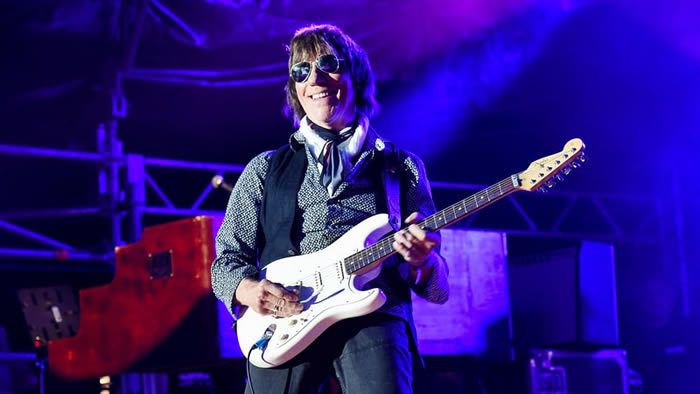 Guitar legend Jeff Beck reflects on more than five decades of playing with everyone from Eric Clapton to Stevie Wonder. Roger Goodgroves/REX Shutterstock

"I was going to write an autobiography once," Jeff Beck says with a laugh. "I started writing it, and then I thought, 'No, let them dig around when I'm dead.'"

Jeff Beck recalls what it was like to see Jimi Hendrix live and discusses how he and singer-lyricist Rosie Bones wrote songs for his new LP.

It's a late April day, and the guitarist, age 73, is reclining comfortably in a black chair in his Tribeca hotel suite. It's a big room with a fireplace and a table with bowls of fruit and candy bars on it. He's dressed casually in a striped hoodie-like shirt and alternates between drinking cappuccino and Evian. It's good to be Jeff Beck, and he has the proof.

He might not be writing his memoirs, but he recently participated in a feature-length documentary about his life, Still on the Run: The Jeff Beck Story, which tells his whole history, from strumming a homemade guitar as a teenager with his chum Jimmy Page to joining the Yardbirds and becoming a solo phenomenon who plays with a unique voice. Depending on the song, Beck can emulate a human voice on his instrument ("'Cause We Ended as Lovers," "Nadia"), add exotic flair to otherwise straightforward pop songs (the Yardbirds' "Heart Full of Soul") or making his six strings screech to high heaven ("Beck's Bolero"). Helping him to reflect in the film are Page, Eric Clapton, Rod Stewart, David Gilmour, Ron Wood, Slash and a host of other artists he's performed with over the years. It chronicles his artistry, his erratic temperament – such as quitting the Yardbirds and breaking up the Jeff Beck Group when they were both on the verge of success – his notable collaborations (like working with Stevie Wonder) and, of course, his legacy as a guitar idol. And it touches on why he never achieved the same broad level of fame as his peers, and the fact that he kept moving on to new ideas and new sounds, from rock to jazz fusion to electro-improv and back again.

Ultimately, he was pleased with how the film came out. "It was like This Is Your Life in condensed form," he says. "But they left out all the gory bits. I'll save those for myself.

"What I wanted to do was try to get a major film company in a proper film, maybe call it All the Good Bits," he says with a smirk. "Because I don't think anybody that's had a long career has actually done the comedic side of showbiz, rock & roll, whatever. It's a shame not to have the Keith Moon hovercraft in this – it's just gold dust – going to the pub on a hovercraft. It's the sort of thing that Mike Myers and Dana Carvey could do. [Carvey] would be perfect."

Although Beck is in New York ostensibly to talk about his upcoming summer tour with Ann Wilson and Paul Rodgers, he demurs at questions about what his fans should expect. "I'd rather let the reveal happen musically, rather than verbally," he says. Similarly, he's tight-lipped about the direction he's taking on the new music he's working on. All he'll say is that "the tour will signal the direction of the music." So instead, the surprisingly garrulous guitarist spends the next hour or so reflecting on his career so far.

How does it feel to watch this film and hear all the nice things Jimmy Page, Eric Clapton, David Gilmour and Slash had to say about you?

I must admit there was a tear [laughs] especially with Eric. I never expected him to bother to be in it. I studied his face over and over, just to make sure there wasn't something else going on [laughs]. But no, it was just overwhelming.

In the film, Eric said that listening to you play has given him a lot of wakeup calls.

Oh, more than one? [Laughs] It's funny how Eric's character was emblazoned in my brain as being a real bother boy ­– like, a force to be reckoned with, someone who's moody, maybe punchy. And I never met him until I'd been in the Yardbirds and that act had been committed. We'd already upset him immensely by getting to America before he'd had a chance to go, and we were selling records – the two goals of that most rock & roll guitarists would look for – and he was playing in a club with John Mayall for eight people [laughs]. I thought, well, at least you're committed in your craft [laughs]. And then lo and behold he comes out with Cream and swipes us all around the head.

Reading old interviews with the two of you, it seems like he felt some professional competition with you. Did you ever feel that?

I remember he invited me to this gig [in 1980] in Guilford, near where he lives, and I thought, "Why is he asking me?" I thought to myself, "Obviously you won't be playing, so go along and have a beer." On the way there, he goes, "Do you want to play 'Blackie'?" And I said, "Uh, I don't know that song." He said, "No, it's my guitar." I went, "Oh, whoops." First calamity of the evening. So I said, "I didn't bring a guitar, so I'll do that." Then about a minute later, he turned around and stood at the car and goes, "This is not gonna be one of these blowing-off things, is it?" I said, "Listen, either I play or I don't." And there was that, what's the word, uncomfortable rivalry about it.

I found out later from Pattie, his wife, that there definitely was [rivalry] – especially with the Stevie Wonder stuff. He was not too amused about me doing something successful with Stevie. I think that maybe got under his skin a bit.

Did you feel that way toward him at all?

No, I just thought he's got the blues covered. And he's also got some very good pop songs. And I don't have either, really. I'm not committed to putting myself up for a blues guitarist, even though I love playing the blues. Beck with Eric Clapton in 1981. "He's got the blues covered," Beck says. "And he's also got some very good pop songs. And I don't have either, really." Alan Davidson/Silverhub/REX Shutterstock

You've always cited early rock & rollers like Gene Vincent and the jazz guitarist Django Reinhardt as bigger influences on you than blues artists.

That's because they were the first nuclear explosion musically [for me]. It must have grabbed Jimmy [Page] the same way. I believe that James Burton was more important than Earl Hooker, for example, in the first instant. But it was only during the meetings with Jim at his house in our teenage years that we really got into who was playing what. We were like news reporters going to one another's houses: "I've just heard that Buddy Holly didn't play on 'That'll Be the Day.'" And we'd go, "What?" It was somebody else; [Buddy Holly session guitarist] Grady Martin was playing the guitar. This was shocking stuff for somebody who was so incredibly committed to those players and believing of them.

What was Jimmy like when you first met him?

When you watch the film, if you freeze-frame on that picture of me with him, he had a tiny little face and short hair. Maybe a few years later, one knock at the door and there's a different person standing there with six-foot-long hair, and that's how the fashion changed. But yeah, he was excited. And likewise, we were two people on a quest to find out how things were done and generally enjoying this thing with 100 percent attention to detail.

Your mother pushed you toward piano, but that didn't take. What did your parents make of your rock career?

I probably blotted out how it really was because I just don't care to recall any upheavals in the family, which they were plenty of. But they somehow didn't prevent me from doing it. They complained but they didn't stop me. I suppose they thought, "If he's got the guitar, he's not going out stealing." The only friends I had were pretty low-life; most of them were one step away from jail.

Did they ever appreciate your success?

No, they beat me up.

I meant your parents, not your friends.

Oh, no they beat me up [laughs]. The funny thing with the parents is the neighbors would complain that I was playing too loud. And then the day I went on Top of the Pops, they were cutting their hedges suspiciously late in the evening when I arrived home, just to say, "Oh, I saw you on television. Very, very good." I go, "Yeah, a year ago, you'd have called the police."