Heather Nigro was there at Tom Petty’s last concert a week ago in Los Angeles. And she remembers saying these words to a friend:

A week later, Tom Petty has died of an apparent cardiac arrest. And Nigro — along with rock fans throughout Southwest Florida — can't believe Monday's news.

“I’m just completely shocked,” Nigro says. “He was such a tremendous musician. … He will always be — and was and still is — rock royalty.”

Tom Petty had many fans in Southwest Florida, apparently. He played two sold-out shows at Germain Arena over the last 12 years, most recently in May 2012.

Former News-Press entertainment reporter Mark Krzos saw Petty perform at Germain Arena and also, way back in 1986, he saw another show with Petty performing with Dylan and the Dead.

“I was 13 at the time,” the Fort Myers resident said about that 1986 show. “He was a true giant. Not too many rock acts can say they've had hits in four decades.”

Nigro was at one of those Germain Arena shows, too. And she considers herself lucky to have seen Tom Petty and the Heartbreakers perform one last time at the Hollywood Bowl in Los Angeles. 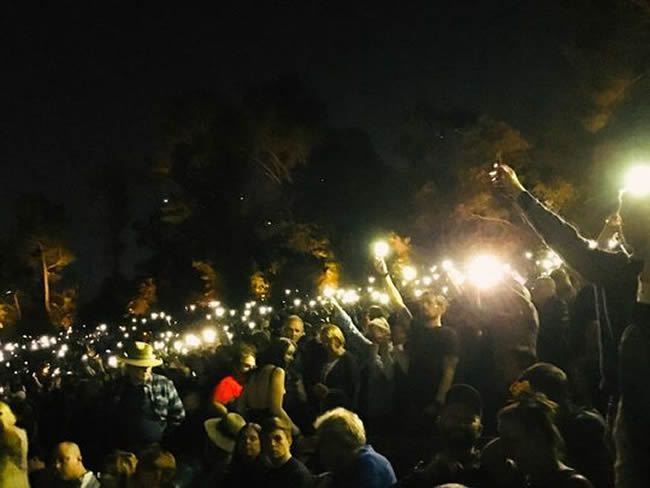 For that Sept. 25 show, Petty wore a velvet suit with padded shoulders, Nigro says, and he smiled a lot and chatted with the audience. The night included an exuberant, 15-minute jam on the 1994 song “It’s Good to be King.”

“He was just having a great time,” Nigro says. “If you told me that Tom Petty was going to be dead a week later, I would have been like, ‘Really?’ He was just a tremendous performer.

“The greats are going. And I often question who’s next, who will carry the torch?”

Constantine Grim, guitarist for local rockers The Electric Mud, called Petty "a massive inspiration on me as a Florida-born player ."

"His love and belief in the integrity and honesty of rock and roll shaped the musician and the songwriter I am today," Grim says. "I was fortunate enough to see him the last time he was at Germain. It was church."

Liz Abbott of Sanibel Island went to college in Gainesville, Petty's hometown, and she says his spirit remained strong there.

"You can't attend UF without a little Petty running through your veins," Abbott says. "Today is a heartbreaker."

Petty’s death was all everybody was talking about Monday afternoon at Buckingham Blues Bar, despite conflicting news reports that day about Petty's death.

“It’s such a total shock,” says bar owner and blues musician Tommy Lee Cook. “We’re all sitting in the bar talking about it right now.

“He defined multiple generations of people… It just tears me up thinking about it.”

“They’re going to be playing his songs 100 years from now, “ Cook says. “He DEFINES American rock ‘n’ roll. I don’t know who else we could put up there with him.”

Even better: Petty was a Florida native. Petty left Gainesville the year before Cook arrived to attend college, he says,

“He’s a Gainesville boy, a Florida man,” Cook says. “And he just took off and went and did it.”