INDIO, CA — Two names from the baby-boomer pantheon, the Rolling Stones and Bob Dylan, opened the Desert Trip festival on Friday night, starting a weekend of six bands led by songwriters who first forged their reputations in the 1960s. Saturday brings Paul McCartney and Neil Young; Sunday, the Who and Roger Waters (whose 1960s band was Pink Floyd), and the whole lineup repeats next weekend. 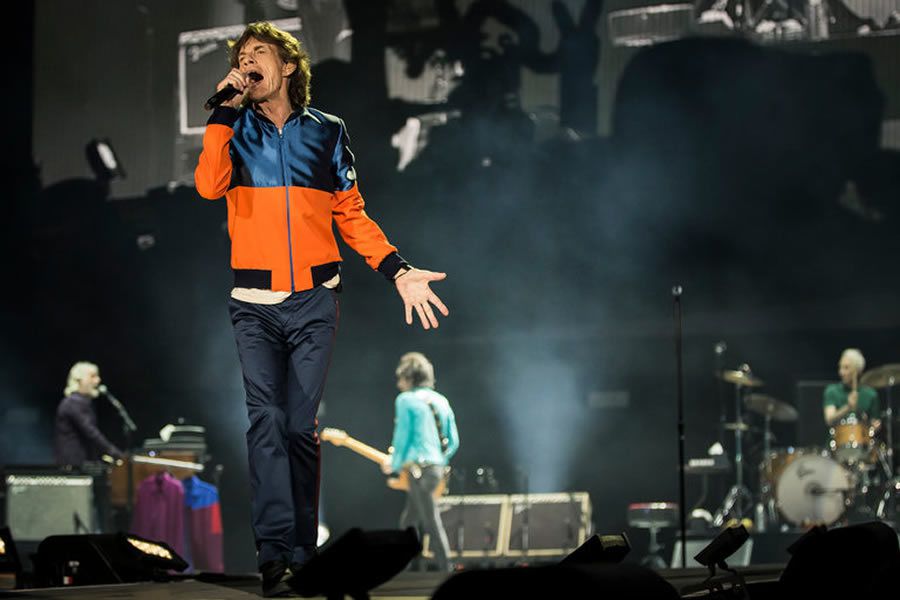 Mick Jagger of the Rolling Stones onstage on Friday during Desert Trip. Credit Carlos Gonzalez for The New York Times

Desert Trip, produced by the company behind the Coachella festival and held in the same place — but with a much less strenuous schedule and setup, including reserved seats with padded chairs — is an easy target for mockery. It was immediately dubbed Oldchella for its lineup of septuagenarians performing once-startling songs that are up to half a century old, to a crowd that can look pretty creaky when trying to dance.

But on opening night of Desert Trip, far more than nostalgia was in play. Only a handful of 1960s-era musicians can still regularly draw tens of thousands of people when they tour, and they are hardly content to be oldies acts. Mr. Dylan, who was never exactly a softhearted songwriter, now openly confronts both his crumbling voice and a treacherous world, while the Rolling Stones continue, stubbornly and miraculously, to romp across stages.

Both Mr. Dylan and the Stones hold on to a 1960s spirit of improvisation; with them, no two concerts are the same. If that means some imperfection during a set — a warm-up song or two, a scrape against vocal limitations, a collision of guitar parts — that’s a worthwhile price for spontaneity. On Friday night, both Mr. Dylan and the Stones had another 1960s keepsake in common, too: a deep grounding in the blues.

At first, Mr. Dylan seemed just gruffly professional. He opened his set with a longtime crowd-pleaser, “Rainy Day Women #12 & 35,” though it had more grievance in it than the droll original, along with some changed lyrics. A full-band version of “Don’t Think Twice, It’s All Right” made its kiss-off sound callously matter-of-fact, and Mr. Dylan rattled complacently through an upbeat “It’s All Over Now, Baby Blue.”

But when Mr. Dylan moved out of 1960s songs with “High Water (For Charley Patton)” — Hurricane Matthew was hitting the Southeast — his voice dug in as an apocalyptic tone entered the set and stayed there. “Early Roman Kings,” a Chicago-style blues shuffle with thrusts of slide guitar, hurled brutal gangster boasts.” In “Lovesick,” the singer was betrayed and devastated; “Lonesome Day Blues” started with roadhouse bravado before turning into an inventory of dishonor and death. “Pay in Blood” from 2012 was a crisp, gory threat, and two of Mr. Dylan’s most accusatory 1960s songs, “Desolation Row” and “Ballad of a Thin Man,” were sped up but remained pitiless. His encore was a furious, unforgiving “Masters of War”: Mr. Dylan as moral scourge.

Mr. Dylan made few concessions to the festival setting, though he didn’t play a set dominated by Frank Sinatra covers, as he has been on the most recent leg of his current tour. As a rule he refuses permission to be photographed, but early in his set his stage image was enlarged on video screens, the only way for much of the Desert Trip audience to see him. That ended after a half-dozen songs, and scenes from black-and-white movies replaced Mr. Dylan onscreen. Even in the video-laden 21st century, Mr. Dylan was sticking to audio.

The Rolling Stones, meanwhile, are inveterate showmen who have been working two very different acts simultaneously through the decades. One is peripatetic: Mick Jagger’s stamina as he covers what must be miles of footsteps per show, roostering and gesticulating across a very wide stage with a runway into the audience — and singing nearly all the way, melodic and expressive. (Another of Mr. Jagger’s jobs is patter; moments after he promised not to make age jokes, he described the festival weekend as the “Palm Springs retirement home for genteel English musicians.”)

The Stones’ other act is a musicianly one: the band’s nightly variations on its songs, with an endless cat’s-cradle of exchanges between Keith Richards and Ron Wood on guitars over Charlie Watts’s impeccable drums and Darryl Jones’s bass. Mr. Richards usually has the gut-level rhythm parts while Mr. Wood takes the smoother high filigrees and slide-guitar wails. But there’s plenty of overlapping territory where anything can happen.

The songs themselves, by Mr. Jagger and Mr. Richards, are crucial. Whether or not the Stones had Oldchella in mind, Mr. Jagger opened the set singing about perseverance against the mortality: “Start Me Up,” “You Got Me Rocking,” and the funky 1997 song “Out of Control.” Eventually he moved on to immortal figures like Lucifer (“Sympathy for the Devil”) and “Jumpin’ Jack Flash.”

Tucked into the set was a new old song: “Ride ‘Em On Down,” by Eddie Taylor. It’s a track on “Blue & Lonesome,” an album due Dec. 2 that consists of a dozen Stones remakes of blues songs. A new backup singer, Sasha Allen, delivered the raspy scream in “Gimme Shelter.” The Stones also played a Beatles song: “Come Together.” The sinewy riff suited Mr. Richards, though Mr. Jagger fudged some of the lyrics. Mr. McCartney, who was at the festival on Friday night, didn’t seize his chance at a cameo.

It took a few songs for the Stones to align; “Start Me Up” had some particularly precarious moments. But soon the band was remaking its songs from within. Mr. Richards put cunning rhythmic shifts in the skeletal, syncopated doublestops of “Honky Tonk Women,” and his lead in “Sympathy for the Devil” stabbed like a rusted switchblade. Mr. Richards and Mr. Wood brought whipsaw ups and downs to “Midnight Rambler” and honored the riffs of “Brown Sugar” while knocking them around just enough.

Stones songs like those have outlasted the taboos they once triggered; familiarity has replaced shock as the band’s fans have grown from their youth to parent- and grandparenthood. But onstage at Oldchella, the Rolling Stones still weren’t acting their age.