INDIO, Calif. — The past loomed, long and weighty, over Desert Trip, a three-night festival here with a lineup of baby boomers’ rock heroes. It was simply two sets a night: the Rolling Stones and Bob Dylan on Friday, Paul McCartney and Neil Young on Saturday and Roger Waters and the Who on Sunday. That lineup is to be repeated Friday through Sunday and perhaps never again. 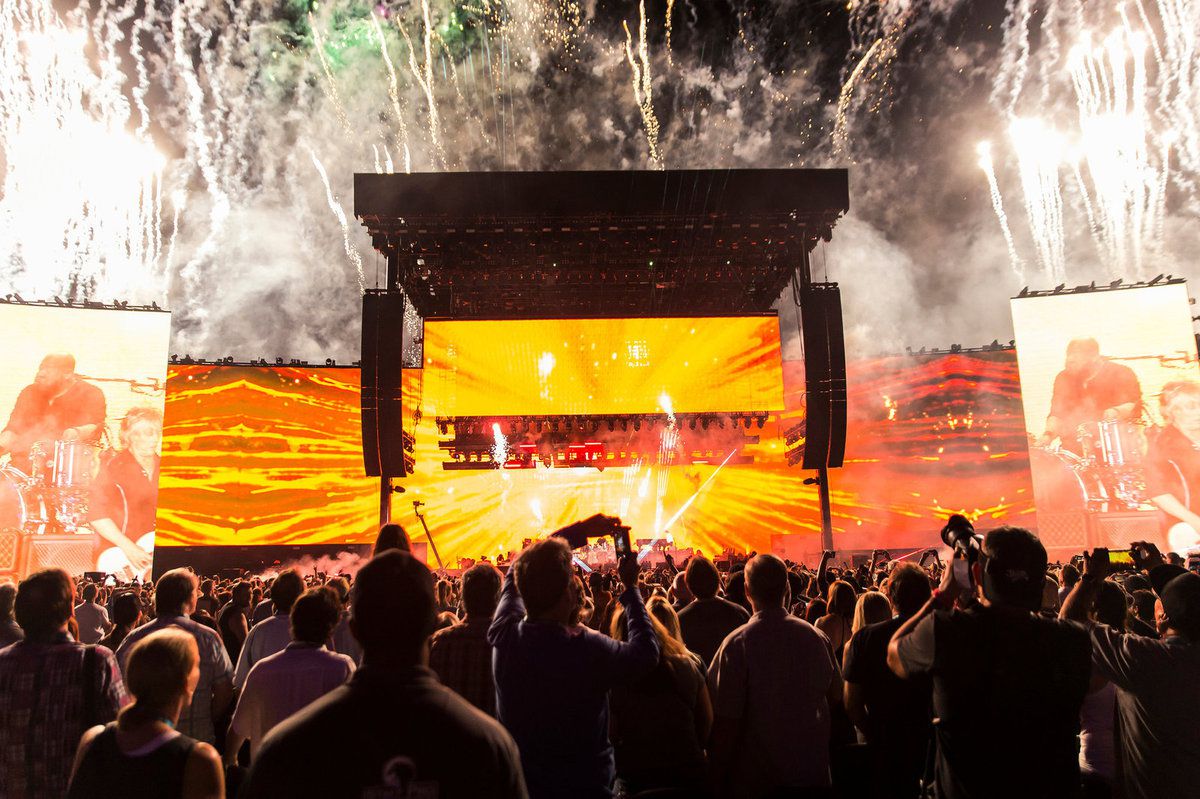 Paul McCartney’s set at the Desert Trip festival in California over the weekend ended in fireworks. Credit Carlos Gonzalez for The New York Times

The musicians are among the last of a very limited breed. They all got their start in the 1960s, delivered songs that became cultural touchstones, have kept recording into this century and can fill arenas on tour. (They are also all white men; was Aretha Franklin invited?)

Yet the headliners were performing live music, which takes place in the present tense, and they played as if they still have something to prove: not just longevity but a die-hard rock spirit. Although they are in their 70s, they have stayed on the job, fighting physical limitations and the temptations of routine — and at Desert Trip, they are still battling. All of them delved beyond their surefire hits, digging out songs that deserved another airing or, as Mr. Young did, performing a handful of new ones. And none took their songs, no matter how popular, for granted.

Facing a crowd of about 70,000 people (not to mention the other acts on the lineup), they shrugged off the jokey label immediately attached to the festival — “Oldchella” — and placed their music in the here and now. During the Rolling Stones’ set, Mick Jagger teased that the festival was a “retirement home” for the musicians. Actually, they were still testing themselves in real time, on a stage where every lapse — and inevitably there were a few sour vocals and slapdash guitars — would be very public.

The chance to see all six acts in one weekend brought out tens of thousands of gray-haired fans who haven’t had a major rock festival tailored to them before, along with a younger contingent whose members weren’t all dragged along by their parents. The promoter behind the Coachella Festival, which is held on the same site and is geared to musicians and fans who are decades younger, catered to the mature crowd with a superb but not overbearing sound system — including surround-sound effects for Mr. Waters — along with a lot of reserved (and padded) seating, upscale food and wine, and other comforts. The songs were almost entirely familiar, but they didn’t aspire to mere comfort. When the headliners first made their mark decades ago, they were heard as disruptive, forever changing the ways listeners would respond to sounds — distorted guitars, untrained voices — and to lyrics that might be startlingly blunt or downright inexplicable. Even the genial Mr. McCartney, in and out of the Beatles, had aggressive songs like “Helter Skelter” and “Live and Let Die,” both part of his far-ranging set on Saturday.

But the headliners’ hits have been played on the radio for decades and mined for musical ideas by countless successors. Their songs are also ingrained in a generation’s nostalgia for both its own youth and for the aesthetics of analog-era rock. To work right, they need at least a little shaking up.

For Mr. Dylan, the Rolling Stones, Mr. Young and the Who, that meant spiking their songs with improvisation. Mr. Dylan has always restlessly rearranged his songs, toying with lyrics and leaving only a few of his recordings’ musical landmarks intact. On Friday night, he recast and zeroed in on some of his most caustic and merciless songs — among them “Masters of War” from 1963, “Ballad of a Thin Man” from 1965 and “Pay in Blood” from 2012 — and sang them with deep cunning and venom coming through his much-weathered voice.

Mr. Young has expansive psychedelic jamming in his DNA — his set included a 22-minute “Down by the River” — while the Stones and the Who are built around guitarists who constantly claw at their songs from within. Keith Richards and Ron Wood, the Stones’ guitarists, played nonstop games of syncopation and suspense amid the band’s well-known riffs, while Mr. Jagger raced all over the stage without missing a note. Pete Townshend of the Who set off countless controlled detonations in his songs — trilling, jabbing rapidly, bending notes, scraping his strings, flinging and windmilling a dozen kinds of power chords — while Roger Daltrey swung his microphone on its cord and flaunted his lung power.

Although he reveled in the stuttering that has always been part of “My Generation,” Mr. Daltrey took care to enunciate one line quite clearly for the Oldchella audience: “Hope I die before I get old.”

For Mr. Waters and Mr. McCartney, whose music is more meticulously controlled, executing old songs anew meant updated spectacle and significance. Mr. Waters did a full set of material from his former band, Pink Floyd, often playing groups of songs to revisit the way the band’s concept albums inexorably build. He has a rare ability to make slow songs majestic rather than tedious; his rock dirges can open like chasms underfoot, accompanied onstage (as they have been through the years) by up-to-the-minute video technology. Mr. Waters placed opposition to Donald J. Trump at the core of his set, showing images of the candidate (in, among other things, a Ku Klux Klan hood) on video and on a flying inflatable pig during the bluesy, condemnatory “Pigs (Three Different Ones).” The festival in the California desert drew 70,000 fans, mostly baby boomers, but also younger fans who hadn’t all been dragged along by their parents. Credit Carlos Gonzalez for The New York Times

The election was on other performers’ minds, too. With British understatement, Mr. Townshend said a weary, wary, “Good luck with your election,” while Mr. Young mockingly suggested his “Welfare Mothers” for a Trump campaign song. Most of Mr. Young’s set — performed on a stage that held tepees and a cigar-store Indian — was devoted to songs with environmental concerns, warning about polluting the earth and exhausting natural resources; it was also a showcase for his current band, Promise of the Real, which can handle both loud, impetuous jamming and folksy ballads.

Desert Trip tacitly raised the question of what keeps a musician in broad demand for a half-century. Skill and longtime productivity are part of the answer; all the headliners have gigantic catalogs, holding far more good songs than they could cram into any one set. Another requirement may well be a combative attitude, a streak of hardheaded resistance.

Mr. McCartney was the exception, radiating aw-shucks kindliness and preaching heartfelt peace and love in many of his songs. Perhaps his musical gifts — his innumerable melodies, his harmonic convolutions, his endearing voice — are so prodigious that they overwhelm any skepticism. But his affability was outnumbered 5 to 1: by the Rolling Stones’ raunch and cynical sass, by Mr. Dylan’s dire visions, by the Who’s fury and self-inquisition, by Mr. Young’s pragmatic bluntness and by Mr. Waters’s sullen, broad-spectrum opposition to authority. The skills of an entertainer may be good for a hit or for a streak of them. But for lifelong companionship, listeners choose songwriters who help them keep up the fight.