Lisa Fischer (born December 1, 1958) is an American vocalist and songwriter. She rose to fame in 1991 with her debut album So Intense, which produced the Grammy Award–winning hit single "How Can I Ease the Pain". Known for her wide, high-reaching vocal range, Fischer has been recognized as one of the most successful session vocalists of the era. She has been a back-up singer for a number of famous artists, including Luther Vandross and Tina Turner, and has toured with The Rolling Stones since 1989, where her popularity with the fans has brought her to routinely duet with Mick Jagger on several songs when performing onstage. 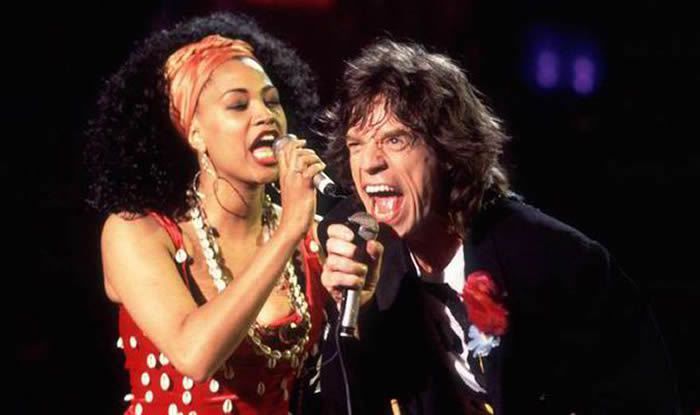 Fischer was born in the Fort Greene neighborhood in the borough of Brooklyn, New York. “The self-proclaimed "East Coast girl," reared in Brooklyn now resides in New Jersey. Fischer’s mother gave birth to her at age 15 and had a total of three kids by the time she was 19. During her childhood, Fischer and her family lived off welfare and food stamps. When Fischer was 14 her father left and at age 17 her mother passed away, leaving Fischer with the responsibility of taking care of her two youngest brothers. Fischer's love for singing was encouraged by her mother, a homemaker; father, a security guard and warehouse worker; and two younger brothers. In an interview with Christian Wikane of PopMatters, Fischer stated that she was influenced by Freda Payne, Marvin Gaye and Melba Moore, as well as others early in her childhood. Before Fischer launched her solo work, she was greatly influenced by the LGBT community.

Fischer has described the experience of developing a stage image that has adventure, quality, and beauty. She said that she found inspiration for this image from make-up, wardrobe, and other things in the LGBTQ community around her. In 1983, under the stage name Xēna, Fischer released a Latin freestyle single, the electro classic "On the Upside". In 1984, a club track she recorded titled "Only Love (Shadows)" was briefly featured in the motion picture Beat Street and was later released in 1995 as part of the Hot Productions' The Best of Criminal Records compilation. However, Fischer began her music career supporting other artists providing backing vocals for artists including Melba Moore and Billy Ocean. She worked with many other famous singers, both as a session vocalist and sideman. She accompanied Luther Vandross whom she met through the mutual acquaintance of choreographer Bruce Wallace, who asked her to come to his agency for an audition. Fischer then traveled as a backup singer on his tours and sang on his albums until his death, in addition to other famous musicians, including Chaka Khan, Teddy Pendergrass, and Roberta Flack.

Fischer's solo career peaked with the 1991 release of "How Can I Ease the Pain" from her album So Intense, which reached number one on the R&B charts and won her a Grammy Award for Best Female R&B Vocal Performance in 1992. The album spawned three Top 20 R&B hits and peaked at #5 on the Top R&B/Hip-Hop Albums chart and #100 on the Billboard 200 chart. When she was questioned asked about the inspiration for her album, Fischer replied that "I wasn't deep in search of a record deal, it was just one of those things that happened". In the movie 20 Feet From Stardom, Fischer's Grammy award for her hit single collects dust on a shelf. Fisher said she "just doesn't know what to do with it." Lisa Fischer was successful from her first album and her solo career, unfortunately she was unable to achieve that success with her second album. After an attempt to create a second album at Elektra Records it failed due to “energy shifts”.

Fischer also provided stirring vocals on the power ballad "Colors of Love" which was featured on the soundtrack album for the film Made in America. Fischer stated that the reason she discontinued her career as a solo artist afterward was because she enjoyed being a backing singer much more than a solo artist. Fischer rejected the idea of never being satisfied and the theory of always aspiring for something more. She stated that she just enjoys doing music and supporting other artists. Fischer compares back up singing to being a "tuning fork". In 1992, Lisa traveled to Japan to perform in the Earth Voice Concert with Lee Ritenour, Phil Perry, Bobby Caldwell, Brenda Russell, James Ingram, Michael McDonald, Anita Baker, and others. She sang her 1991 R&B hit "How Can I Ease The Pain" and also sang background vocals for other artists. Returning to her solo career after singing backup for major artists and groups, Lisa Fischer has sold out six consecutive shows at The Jazz Standard in 2015.

Fischer has been engaged with dance throughout her career and worked with some ballet companies when she collaborated with Alonzo King to create music / dance pieces, and has performed at their world premieres. Fischer maintained her career as a session singer and continues to accompany The Rolling Stones on every one of their tours since 1989. She worked as a backup vocalist during the same period for Luther Vandross for the 22 years prior to his death, having to juggle her time between his concert tours and those of The Rolling Stones, with whom she has a growing audience as she plays the foil to Mick Jagger onstage more and more frequently. There are songs that have become staples during tours with the Rolling Stones where she shares lead vocals, including "Monkey Man, and "Gimme Shelter", which showcases her vocal talents and is frequently on the set lists during their live concerts.

Fischer sang on Sting's album If on a Winter's Night... as a backing vocalist. In September 2009, Sting and his band, plus Fischer, performed the songs live in Durham Cathedral. The rehearsals as well as the concert were filmed and were released as a DVD. The behind the scenes documentary surrounding the event was produced jointly by the BBC and was screened on December 29 that year. Fischer appeared at the 2010 CareFusion Newport Jazz Festival in Newport, Rhode Island, where she was featured with jazz trumpeter Chris Botti. She continued to tour with Botti through 2010, including appearing nightly as guest vocalist during the trumpeter's annual holiday engagement at the Blue Note Jazz Club in New York City. She remained a guest artist with Botti's band in 2011 and continued to appear at their 2012 concerts. Fischer is one of the main artists featured in the Oscar-winning documentary film 20 Feet from Stardom (2013), which premiered at the Sundance Film Festival and was released on June 21, 2013. The documentary highlights often unheralded minority women backup singers by archiving the oral histories of artists like Merry Clayton and Darlene Love and their experiences within the American music industry.

In 2013, Fischer joined the rock band Nine Inch Nails as a backing vocalist for their Tension 2013 tour.  In 2014 Fischer reunited with many of the backup singers in 20 Feet From Stardom including Darlene Love, Merry Clayton, and Judith Hill to sing the national anthem at the 100th Rose Bowl in Pasadena, California. That same year it was announced that Fischer would be collaborating with performer Billy Childs on a studio project that would pay tribute to Laura Nyro's musical talent and life. Lisa Fischer is currently on tour, this time singing lead with backup trio Grand Baton.