Mick Jagger on James Brown: ‘He Was Very Generous and Kind With Me and He Wasn’t Kind With Everybody’ 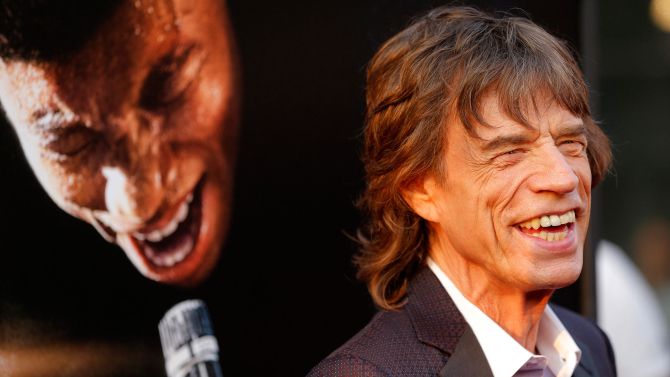 The Mecca of R&B music, aka Harlem’s Apollo Theater, played host to Monday’s world premiere of Universal’s James Brown biopic “Get On Up.”

“I first saw James Brown at the Apollo,” said Mick Jagger, who produced the film through his shingle Jagged Films. “A lady (sitting next to me) was smoking a big joint. I didn’t ask her for any. I just looked at it longingly.”

Before taking the stage, Jagger explained why he wanted to not only produce The Godfather of Soul’s narrative with Jagged partner Victoria Pearman, but also develop and produce Alex Gibney’s upcoming docu about the icon, “Mr. Dynamite: James Brown and the Power of Soul.”

“(James) was very generous and kind with me and he wasn’t kind with everybody,” Jagger laughed. “I really appreciated that. I always studied him and the way he moved, the way he always gave his best and always changed up his style.”

At the tented after party behind the Apollo, Jagger showed off his dance moves while Craig Robinson took it upon himself to emcee the festivities, which lasted until 1 a.m.

The film, about Brown’s rise from extreme poverty in Georgia to world famous figure of the 20th century, has been in the works for 12 years.

“(The project) fell asleep in 2006 and came awake in 2012,” co-screenwriter Jez Butterworth explained. “It was a rights issue. Everyone always wanted to make it, we just needed all of the stars to align.”

Co-scribe John-Henry Butterworth described exposing some of Brown’s less admirable traits as “amazingly easy to get approval” on.

“When James was becoming famous, you had to hide where you came from and be squeaky clean,” John-Henry said. “Whereas if he were an artist launching his career now his upbringing and what happened to him (on the road to stardom) would be right there in the press release. Everyone knows how many times 50 Cent has been shot.”

Two years ago the stars finally did align when Tate Taylor signed on to direct the biopic.

“I was en route to the airport to meet with a living legend who had asked me to do a biopic on her life,” Taylor explained. “On the way to the airport I stopped by Imagine Entertainment for an unrelated meeting and they mentioned, out of the spirit of competition, that they had the James Brown movie. I thought, ‘Well, let me read it.’ And somewhere over Vegas I thought, ‘Oh shit, I want to direct this one, not the one I was going to meet about.'”

As for Universal pushing the release date up from October to August 1, Taylor’s reaction was once again, “Oh shit.”

“We only had 49 days to make the movie and I told myself, ‘Well that’s OK. We will have this leisure post period and if there are any problems we will fix it.’ In the end it worked out and I’m happy with the release date.”